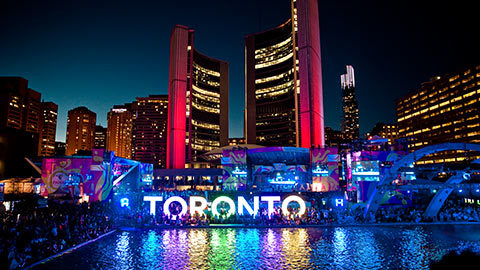 The campaign is part of a deepening relationship between Alipay, OTT Pay Inc., and Tourism Toronto as the city welcomes more visitors from China.

September 19, 2018, Toronto, ON – Major Toronto attractions and retailers are set to take part in a digital Golden Week campaign via the Alipay app – a leading Chinese mobile payment application with a growing presence in Toronto. The campaign is part of a deepening relationship between Alipay, payment integrator OTT Pay Inc. and Toronto’s destination marketing organization, Tourism Toronto. The Golden Week campaign comes at a time when the region continues to welcome, understand and successfully engage with visitors from China, Toronto’s largest overseas visitor market. Major Toronto retailers and attractions are joining the campaign including the CN Tower, Ripley’s Aquarium of Canada, the Royal Ontario Museum, Yorkdale Shopping Centre and Square One Shopping Centre.

During Golden Week, a national Chinese holiday where citizens are increasingly travelling abroad, these participating Toronto retailers and attractions have added special offers for Alipay users which can be redeemed in store via the Alipay app. These retailers will also be highlighted on a special page within the app to drive awareness amongst Chinese tourists in Toronto. The month-long campaign runs from September 20 to October 20, extending the offer before and after Golden Week, which is celebrated in China and around the world from October 1 to 7.

The deepening of this strategic partnership reflects the expanding economic ties between Toronto and China. China has been Toronto’s largest overseas market since 2014 with 319,000 visitors coming to the Toronto region last year. With 2018 being declared as the Canada-China Year of Tourism, opportunity is ripe for Toronto businesses looking to cater to visitors from China who spent $304 million in Toronto in 2017, an increase of 147 per cent over five years.

“Our partnership with Tourism Toronto has been very successful, and we’re excited that the Royal Ontario Museum, Yorkdale Shopping Centre, Square One Shopping Centre, the CN Tower and Ripley’s Aquarium of Canada are participating in our digital Golden Week campaign via the Alipay app,” said Rita Liu, Head of Alipay, Canada. “Through offering payment via Alipay, these destinations are providing Chinese visitors with a familiar shopping experience, unimpeded by language or payment barriers. Toronto businesses that cater to Chinese visitors are creating a commercial climate that is primed for growth.”

The point-of-purchase experience for those visiting from China is important. According to a recent Nielsen Report, jointly released by Nielsen and Alipay in March of this year, nearly all Chinese travellers (91 per cent) would be more willing to shop and spend at overseas merchants that accepted Chinese mobile payment platforms, with 93 per cent of Chinese tourists stating they would use mobile payment overseas if given the option.

“Toronto continues to expand its China-readiness with more and more businesses adopting Chinese mobile payment options like Alipay,” said Johanne Bélanger, President and CEO of Tourism Toronto. “As we near the end of the Canada-China Year of Tourism, now is the time for the tourism and hospitality industry to take China-readiness to the next level. That’s what we’re seeing in Toronto and will continue seeing in the years to come.”

“OTT Pay is excited to be at the frontier of expanding merchant acceptance of the preferred mobile payment methods among Chinese consumers,” said William Lam, Chief Commercial Officer, OTT Pay Inc. “Canadian businesses are now able to allow Chinese consumers to pay with innovative digital payment solutions and leverage advanced marketing platforms to reach an audience group that cannot be easily targeted through traditional marketing efforts. We are only at the beginning of a new wave of technological advancement that will allow businesses to deliver a seamless shopping experience.” More than just an online payment solution, merchants can showcase their business on Alipay’s geolocated-based “Discover” function and push notifications within the app. Merchants can market to Chinese consumers before, during and after their visits to Canada, boosting their brand among the rapidly expanding group of Chinese overseas visitors.

“Local visitors and travellers from China can now use the Alipay mobile app for onsite ticket purchases at the Royal Ontario Museum. We hope to make it easier for the Chinese community, both at home and abroad, to engage with Canada’s largest museum of art, culture, and nature. We look forward to welcoming even more Chinese visitors with the limited-time Golden Week promotion.” – Kathryn Brownlie, AVP Marketing & Promotions, Royal Ontario Museum.

“Ripley’s Aquarium was one of the first attractions in Toronto to implement the mobile payment app, Alipay. Adopting the latest technologies – especially systems that make it easier for guests to visit – are important to us. We look forward to welcoming more and more Chinese visitors to the Aquarium with this limited-time Golden Week offer.” – Peter Doyle, General Manager, Ripley’s Aquarium of Canada.

“Since we began accepting Alipay in February 2018, we’ve had great success with guests using Alipay to take in spectacular views, book an EdgeWalk and dine with us at 360 Restaurant at the CN Tower. Participating in a digital promotion like Golden Week with Alipay is the next natural step as we continue to explore and evolve our utilization of mobile payments; we’re excited by the opportunity of converting the guest transaction into a conversation.” – Neil Jones, Chief Operating Officer, CN Tower.

Operated by Ant Financial Services Group, Alipay is the world’s largest mobile and online payment platform. Launched in 2004, Alipay currently has over 700 million active Chinese users and over 200 financial institution partners in China. Alipay has evolved from a digital wallet to a lifestyle enabler. Users can hail a taxi, book a hotel, buy movie tickets, pay utility bills, make appointments with doctors, or purchase wealth management products directly from within the app. In addition to online payments, Alipay is expanding to in-store offline payments both inside and outside of China. Over 40 million brick-and-mortar merchants now accept Alipay across China. Alipay’s in-store payment service covers more than 35 countries and regions across the world, and tax reimbursement via Alipay is supported in 24 countries and regions. Alipay works with over 250 overseas financial institutions and payment solution providers to enable cross-border payments for Chinese travelling overseas and overseas customers who purchase products from Chinese e-commerce sites. Alipay currently supports 27 currencies. Follow us on Twitter @antfinancial and @alipay.

Tourism Toronto is the official destination marketing organization for the region, “Canada’s Downtown” – encompassing Toronto, Mississauga and Brampton. With sales and marketing programs in key markets around the world, Tourism Toronto promotes the Toronto region as a remarkable destination for tourists, convention delegates and business travellers. Tourism Toronto operates in partnership with the the City of Toronto, the Greater Toronto Hotel Association and the Ontario Ministry of Tourism, Culture and Sport. For more information please visit SeeTorontoNow.com.

As an official payment service and marketing partner of Alipay and WeChat, OTT Pay is the leading platform in seamlessly connecting Canadian merchants to Chinese consumers. OTT Pay Inc. is a member of the OTT Group of Companies, a diversified financial services group that has been delivering trusted financial services to the Chinese-Canadian community since 2006. The Group provides services in securities distribution, investment brokerage, asset management, and foreign exchange. For more information about OTT Pay, please visit www.ottpay.com.